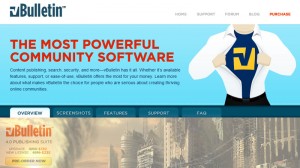 I’ve been using vb4.x since it came out and was never really very happy using that software, I much prefered vb3.x as it felt much more like forum software, self contained, it essentially did as it was meant to, giving me room to do all the other bits like CMSs, article scripts, galleries, etc myself should I need or want them. Version 4 always felt too much like it was trying to be something more than it actually was, trying to be too big and too clever, blogs, CMSs, Groups, changable profiles, etc, etc, way too much, not done well enough and for the most part, extremely confusing for the average visitor, just wanting to join, have a chat, get the information they want and general simple stuff like that, not need to read a manual before they could get started and that’s what it has felt like using vb4.x…. To me, vB4.x has struggled, it has never been the completed product and it has never felt like it has reached anywhere near the level it should have. I remember the jump from vb2 to vb3, now that was exciting, that was a real step forward, that saw FORUM software improve, become more usable, offer more to the end user and simply continue being what it was, but better, vb4.x besides using newer coding practices felt like a massive step backwards, sure it offered more functionality and bits of AJAX to make things feel smoother, but it has been a real let down….

So…. Moving on to vB5 which I know is just a “beta” version at the moment, but seriously, i’m gobsmacked… It should not even be at alpha stage looking at it, never mind showing as a demo version and available for customers to buy, download and install… But my biggest gripe, is that it simply does not look, feel or act like forum software any more. It feels like a poor clone of Facebook and no amount of beta versions is going to change that, because it looks like that is the way it has been designed.

I’d love to give feedback on all of the features, but there’s next to nothing to cover. I’ve installed a completely fresh copy onto my server and have had a good look around the back end, the admincp, the settings, etc, etc and it just feels and acts horribly. I’ve used SMF which is free and that feels more professional than this release. It simply should never have been put anywhere near the public and I feel that I have completely wasted money, because no matter how long I wait, I don’t want a bolt on for Facebook, a Facebook clone, or just some other random clunky social network… If I wanted that, I could have gone to one of the many specific social network clone scripts that are out there. vBulletin is supposed to be forum software and sadly in my mind, you have killed it and that will become very apparant as customers run to the other forum software providers, who actually do as their customers want, instead of providing what you demand the customers use. Loyalty only goes so far…

Suffice to say… I’ll be uninstalling vb5 and it will sit there gathering dust, until such time as it becomes a proper functional forum solution, which sadly I suspect will never happen, as it has gone too far down the social network path now… Such a shame, this used to be a fantastic bit of software, but now it is just a shell of it’s former self.

The biggest shame for me is this:

The vBulletin 3.8 forums will remain active for use for the foreseeable future for support purposes. However please note that vBulletin 3.8 is considered end of life. This means that it will not have further bug-fix release or new functionality added and may not have any future security patches. We will evaluate security issues if they are received.

As that means I have to continue version 4, or run the risk of security holes being found and exploited.

Update: Suffice to say, I have now looked closely at Beta 11, but I am still feeling very cold about the product. This feels like the biggest step backwards of any script i’ve ever handed over money for.

I really hope that you guys plan on supporting vb4 with security patches for the next few years, because there’s no chance in hell of me installing vb5 in the state it is and I still seriously doubt that going from beta 11 to gold is going to change that view, even though i’ve already handed over more than £200 to renew the licences for the lifetime of vb5.