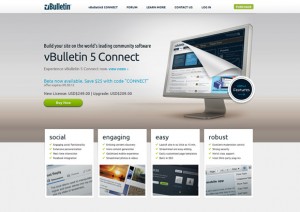 As a vBulletin user for many many years I just wanted to take the time to say how disappointed and cheated I feel with my recent purchase of vB5.

I run many forums and use vBulletin 4.x, IP Board and Xenforo, for my latest forum which I have invested a lot of time and money into I wanted the latest forum software and decided on vB5. I had not read any reviews which is obviously a mistake on my part and solely went on the fact that up until now vBulletin have been by far the market leader, I was comfortable using it and to be honest vB4 was pretty good, surely vB5 would be an improvement?

So I paid the $399!!! …within a week or so I could see that there were lots of changes and that lots (and I mean lots) of functions literally didn’t work. Now this was a fresh install of vB5 so not an upgrade so the optimal conditions really.

I decided pretty quickly that this software was not fit for purpose and asked for a refund, where I was told that as I had downloaded the software this was not possible and that I could sell the licence to someone else if I wanted, but obviously I wouldn’t get my full money back and who in their right mind would buy it?

As I didn’t have much choice I decided to persevere as I thought the next update would fix a lot of the problems I was having, in all honesty the latest update caused more problems than the initial version and this time when I tried to contact technical support I was literally a few days out of the ‘free month of support’ and told to post on the forum or pay for additional support.

Now to be honest I don’t have much spare time and didn’t want to create multiple threads on the problems I was now having so paid for an extra months support where I could detail all the issues in 1 email, hoping they would be fixed. This was a complete waste of money and time as all they do is direct you to JIRA!!! …and rarely actually fix any of the problems there and then.

My issue with JIRA is I have to spend the time either searching for someone else with the same problem and vote for the issue to be fixed or take the time to explain the problem I am having in multiple new posts hoping someone will also have this issue in order for it to actually be fixed. There is never a quick solution and no guarantee that my problems will ever be fixed.

Wait a minute didn’t I just pay $399 for this software and an additional $40 odd dollars for support? Why the hell am I having to spend time pointing out all these problems in the hope that someday they will be fixed? Wasn’t this software extensively tested before being released or is that now my job after spending a fortune on it? vBulletin know of all these problmes yet the product is still for sale.

One day when all the bugs are ironed out Vbulletin will have a great platform once again and reap the rewards, but it is at our cost as we are the people having to point all these problems out and struggle by with software that doesn’t work at the moment.

In my opinion this software was released waaaaaay before it should have been, it is nowhere near as good as vB4, IP Board or Xenforo which would have been a start and has endless bugs and issues that should have been fixed before release. Some of the issues literally stop users from using my forum so in my opinion it is not fit for purpose.

Just simple things that should just work, MARK CHANNELS READ button not working, seriously how hard can that be to fix? Site Maps not working, not that that’s an important function, it’s not like Google ask for a Site Map or anything. Errors when members post. No RSS feed, lots of forums like to post out to their twitter feed, not with vB5!!!!

vBulletin should be ashamed of the whole situation and the position they have left myself and many many other people in, I literally feel like I have been ripped off!

I am sure if this post is allowed to stay that I will get the obligatory ‘I am sorry you feel this way’ but that doesn’t fix any of the problems I have had and currently have.